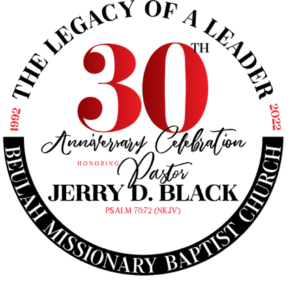 A proud product of the state of Arkansas, Reverend Jerry D. Black, hails from the small town of Blytheville, Arkansas, where he developed a love and sense of compassion for others. Even as a boy, he exemplified a spirit of devotion and cared for the needs of others more than his own. His early years laid the foundation for the life and the ministry of a humble servant of God.

Although best known for his gift of preaching, his ministry began in music. He started playing the piano at the age of eight and quickly distinguished himself as a talented musician. He accepted Jesus Christ as his personal savior at the age of 12, and during his teens, he served as Minister of Music at his home church, the West End Baptist Church, Blytheville, Arkansas.

Although he was extremely dedicated to the music ministry, he soon realized that this ministry was not a substitute for the calling upon his life and he accepted his call to preach the Gospel at the age of 21.

With a sincere desire to administer the church according to the Word of God, Pastor Black continues to preach and teach the Gospel. Beulah has experienced growth and increase under his visionary leadership. From Sage Lane to Memorial Drive to Clifton Springs Road, the legacy of Beulah grows under the shepherding arms of Pastor Black.

The recipient of many honors and awards, Pastor Black is a national icon among preachers and pastors. He is the “Preacher’s Preacher.” Yet, his heart for serving God’s people remains the same as he focuses on service and not fame and prosperity, a rarity for a pastor and preacher of his caliber. A servant-leader, Pastor Black has visited the sick, served bereaved families at repasts, counseled members privately, and greeted members and visitors after each worship service.

Pastoring in a Pandemic

In March of 2020, our community, state, nation, and world were overtaken by Covid-19 and a deadly pandemic started to form around us. Pastor Black and the leadership of Beulah made the important decision to cease in-person worship services and begin a 100% virtual ministry that continues in 2021. Week after week, Pastor Black continues to preach, teach, pray, and lead the people of Beulah. As Beulah ministers in a new way, the leadership, Christian Education, and delivering of the Word of God remains consistent and strong. Our virtual audience has grown, and we have gained new members because of Pastor Black’s powerful and dedicated ministry.

So he shepherded them according to the integrity of his heart, And guided them by the skillfulness of his hands.