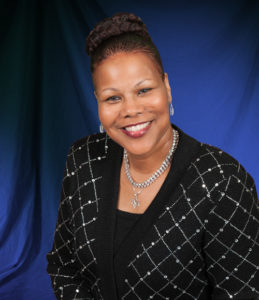 First Lady Kate F. Black is the devoted wife of the Reverend Jerry D. Black Sr., pastor of Beulah Missionary Baptist Church, Decatur, Georgia. She is known for her energetic personality and her effervescent presence among the people of God. With a heart for all people, she has a unique gift to connect to the seasoned saints and the youth and young adults of the church.

First Lady Kate loves God; she seeks to remain humble to be used as a servant to bless His people. She loves God’s people; she strives to be a positive influence in their lives. Because of this love, she serves God and His people with great joy.

First Lady was born and reared in Detroit, Michigan. As a child, she developed an appreciation for the church and a love for Gospel music as she sat at the feet of her mother, who was the minister of music of the family’s church for years. These early years in the church propelled and prepared her for later work in the ministry. Always singing in a choir, she was a proud member of the 1974-76 Eastern Michigan University 100 Black Gospel Choir.

Even as she was transitioned to different locations throughout the nation as God elevated her in corporate America, she always found a church home to remain faithful to the church and to work in ministry. In Columbus, Ohio, Triedstone Baptist Church, became her home church, where she was a member of the Voices of Triedstone for fifteen years and a trustee for five years. At Triedstone Baptist Church, she was also very active in the “Women be Blessed Ministry.” During her two-year stay in Connecticut, she was appointed the administrative assistant to Pastor Cynthia G. West at the Triumphant Ministries. While in Kentucky, First Lady was a member of Canaan Baptist Church. While she was appointed to the leadership staff of the Sunday School at Canaan, God had other plans for her and moved her back to Ohio before she accepted to serve in this capacity.

God’s last career move for First Lady Black prior to her retirement was Atlanta, Georgia. After visiting several churches in the metropolitan area, she joined the Beulah Missionary Baptist Church and immediately became involved in ministry. She started with her first love, the music ministry, and joined the Jerry D. Black Senior Choir and then the Women’s Ministry of Beulah.

Upon moving to Columbus, Ohio, First Lady Kate began her 35-year successful career with the United States Postal Service. During her tenure with the company, she excelled in her performance and was a trailblazer in many areas of management becoming the first and only African American female to hold several distinct positions. After being promoted to numerous management positions from 1984 to 2000, she was promoted to the Executive Ranks of the Postal Service in 2001. Such positions are only made up of 0.3% of the company, and of over 600,000 employees, she was one of only five African American females to hold an executive district manager’s position. In this capacity, she served seven years, operating a budget of over one billion dollars and retiring as was one of two African American females with this position.

Recognized for mentoring other employees, she was distinctly nominated five consecutive years for the Diversity Award. She received numerous commendations including the Vice President’s Awards, Customer Service Awards, and Superior Achievement Awards. Upon her retirement in 2012, Mayor Kasim Reed and the Atlanta City Council proclaimed May 4, 2012, as Kate F. Wiley Day, and she was recognized by Morehouse College for her partnership with the college during Black History Month for four consecutive years.

First Lady Kate Black attests that God will fulfill His promises as it has been demonstrated over and over again in her life. As He elevated her in her professional life, he fulfilled an awesome promise when on June 28, 2014, she married the Reverend Jerry D. Black Sr., a man of honor and distinction. Through this marriage, God blessed her with four children and six grandchildren.

“For I know the thought that I think toward you, saith the LORD, thoughts of peace, and not of evil, to give you an expected end. Jeremiah 29:11!