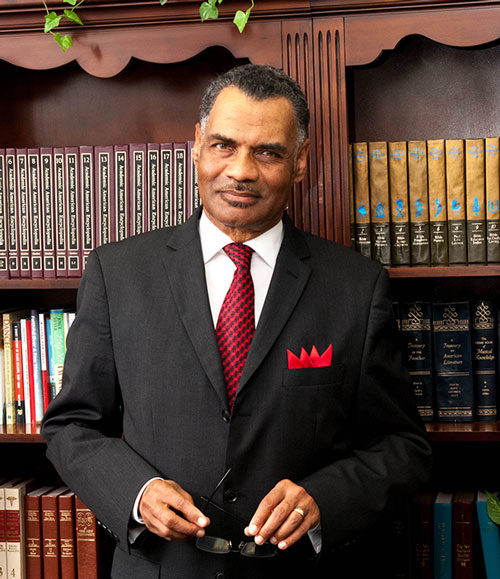 Aproud product of the state of Arkansas, Reverend Jerry D. Black, pastor of the Beulah Missionary Baptist Church, Decatur, Georgia, hails from the small town of Blytheville, Arkansas, where he developed a love and sense of compassion for others. Even as a boy, he exemplified a spirit of devotion and cared for the needs of others more than his own. Reared by his great-grandmother, the late Mrs. Pearl Grant, the young Jerry spent time with “Mama Pearl” seeing that her needs were met as she grew older and less able to care for herself. These early years laid the foundation for the life and the ministry of a humble servant of God.

Although best known for his gift of preaching, his ministry began in music. He started playing the piano at the age of eight and quickly distinguished himself as a talented musician. He accepted Jesus Christ as his personal savior at the age of 12, and during his teens, he served as Minister of Music at his home church, the West End Baptist Church, Blytheville, Arkansas. Although he was extremely dedicated to the music ministry, he soon realized that this ministry was not a substitute for the calling upon his life. Reverend Jerry Black accepted his call to preach the Gospel at the age of 21. He was called and served as pastor of the Greater Paradise Baptist Church, Little Rock, Arkansas, for 15 years. Under his leadership, the church’s membership grew from 17 members to 3,000, and countless others in the Little Rock area were blessed through his popular television and radio ministry.

In November 1991, Reverend Jerry D. Black accepted God’s new divine assignment as the Beulah Baptist Church family confirmed God’s appointment and called him as its seventh pastor. With a sincere desire to administer the church according to the Word of God, Pastor Black preached and taught the Gospel leading to an increase in the weekly church attendance that exceeded the capacity of the overflow area. Pastor Black shared God’s vision to build the new Beulah campus with Phase I, the Worship Center, and Phase II, the Family Life Center. Upon purchasing a former golf course as the land for its next home, the Beulah Lane location was sold quicker than expected, and Pastor Black led the church to its interim location, a storefront, on Memorial Drive that was reconstructed to house a 1200-seat sanctuary. The visionary leader was preparing his people for their new home on Clifton Springs Road. In its temporary location, the church family grew spiritually, numerically, and financially.

The Beulah family moved into the Worship Center in 1999, and then completed Phase II and opened the Family Life Center in 2006. Pastor Black has led the Beulah Church to become the H.E.L.P station with the members and ministries of the church fulfilling the mission of “Helping You Get Where God Wants You to Be.”

The recipient of many honors and awards, Pastor Black is a national icon among preachers and pastors. He is the “Preacher’s Preacher.” Yet, his heart for serving God’s people remains the same as he focuses on service and not fame and prosperity, a rarity for a pastor and preacher of his caliber. A servant-leader, Pastor Black visits the sick, serves bereaved families at repasts, counsels members privately, and greet members and visitors after each worship service.

Pastor Black was married to the late Glenda J. Harris Black for 32 years until her heavenly transition in 2008 after a well-fought four-year battle with cancer. Their union was blessed with four children, Tangie, Jai, Erica, and Terica. With much integrity, Pastor Black continued to lead his family and church family. After much prayer, God blessed him to begin a new chapter in his life June 28, 2014, when he married the former Ms. Kate Wiley. Together, they serve as Pastor and First Lady of the Beulah Baptist Church and enjoy four children and six grandchildren.

As a man after God’s own heart, the message and the ministry of Pastor Black are best accurately described in Isaiah 61:1-2, “The Spirit of the Lord is upon me; because the Lord hath anointed me to preach good tidings unto the meek, he hath sent me to bind up the brokenhearted, to proclaim liberty to the captives, and the opening of the prison to them that are bound; to proclaim the acceptable year of the Lord.  After over 40 years of preaching and 25 years of pastoring at Beulah, he continues to be a relevant preacher and servant-leader of the 21st Century.